A Rare vagrant species. In addition to the Crimea, it is periodically observed in Sivash lake, where a case of nesting was noted in 2017, and in the North-Western Black Sea Coast.

Rare migratory species. For the second year in a row it is observed in the south of Kherson region. The first bird was noted by Yuriy Kodrul together with V. Gedziuk and K. Pylypiuk. Later that day, Oleg Rozhko and Andriy Miskov photographed another male at the specified point. The difficulty of identifying the species is due to the similarity with the Common Kestrel, especially in females and juvenile birds.<br>UPD: On September 3, another female was photographed by O. Burkovsky and R. Yaremchuk near the village of Port in the Odesa region. 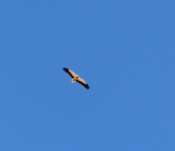